Ever since I created Write.app I always wanted to create an iPhone app. Being a web developer, learning Objective-C seemed like a daunting task and Xcode is a really complex piece of software. So my only option was to use Phonegap. Even Phonegap was too complicated for me. Now, two years later I’m launching my firs iOS app and I need beta testers. Anyone who signs up will get the app for free. 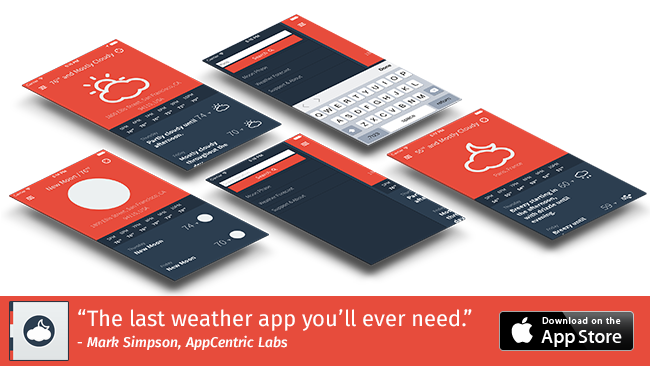 UPDATE – 5/13/2014: MoonWeather has now been released on the App Store and the first update is now being deployed as well.

It’s called MoonWeather and it’s a moon phase tracker and weather app. Check out the demo video: before reading on:

Check out the official website for more about it. It’s really simple but awesome. I always want to know what the phase of the moon is but I always end up having to look it up somewhere. So I built MoonWeather. When you open the app you get the current phase of the moon and the weather (currently, hourly, and 8 day forecast) for your current location. You can also search locations if you want to find out the weather somewhere else.

Yes, it will cost $0.99 when it comes out. Why charge for another weather app? Because it’s damn good looking and has a feature that those who are interested in it want. People pay for well designed apps and people who love the moon pay for… moon stuff. Become a beta tester and you’ll get a free beta version and the first official version free when it’s officially released on the App Store.

Update: I’m no longer actively running the beta program but if you submit your email address I will randomly select 50 to 100 people to receive the app for free when each update is released. I do still need beta testers and I will randomly ask some users to participate but now the promotion is all about spreading the word and getting feedback now that the app has been released.